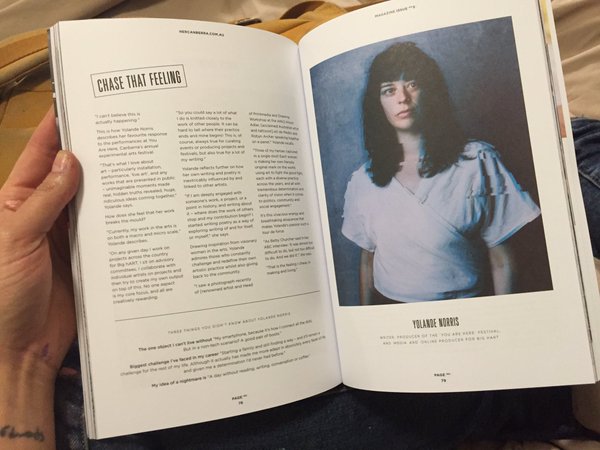 A few months ago I was asked to be one of the featured artists in Her Canberra’s ‘breaking the mould’ edition. I was chuffed, and then even moreso when I found out the calibre of the company I would be keeping in those pages. It was great to chat to Josephine Walsh about some of my creative preoccupations. Not so great to have to have a photoshoot on a 38 degree day only five weeks after having a baby, but I managed to get out of my pyjamas for long enough that we got a passable shot. My interview follows, and you can read the whole edition online now.

“I can’t believe this is actually happening.”

Yolande Norris describes her favourite response to the performances at You Are Here, (Canberra’s annual experimental arts festival which Norris co-founded and ran with David Finnigan between 2011 and 2013). “That’s what I love about art – particularly installation, performance, ‘live art’, and any works that are presented in public – unimaginable moments made real, hidden truths revealed, huge, ridiculous ideas coming together.”

How does she feel that her work breaks the mould? “Currently, my work in the arts is on both a macro and micro scale,” Norris says. “On any given day I work on projects across the country for Big hART, I sit on advisory committees, I collaborate with individual artists on projects and then try to create my own output on top of this. No one aspect is my core focus, and all are creatively rewarding.”

“So you could say a lot of what I do is knitted closely to the work of other people. It can be hard to tell where their practice ends and mine begins!” she explains. “This is of course always true for curating events or producing projects and festivals, but also true for a lot of my writing.

Norris reflects further on how her own writing and poetry is inextricably influenced by and linked to other artists. “If I am deeply engaged with someone’s work, a project, or a point in history, and writing about it – where does the work of others stop and my contribution begin? I started writing poetry as a way of exploring writing of and for itself, or myself.”

Drawing inspiration from visionary women in the arts, Norris admires those who constantly challenge and redefine their own artistic practice whilst also giving back to the community. “I saw a photograph recently of [renowned artist and Head of Printmedia and Drawing Workshop at the ANU] Alison Adler, [acclaimed Australian artist and tattooist] eX de Medici and Robyn Archer speaking together on a panel,” Norris recalls. “Three of my heroes captured in a single shot! Each woman is making her own fiercely original mark on the world, using art to fight the good fight, each with a diverse practice across the years, and all with tremendous determination and clarity of vision when it comes to politics, community and social engagement.”

That is the feeling I chase, in making and living.”

The one object I can’t live without: My smart phone, because it’s how I connect all the dots. But in a non-tech scenario? A good pair of boots.

Biggest challenge I’ve faced in my career: Starting a family and still finding a way – and it’ll remain a challenge for the rest of my life. Although it actually has made me more adept in absolutely every facet of life, and given me a determination I’d never had before.

My idea of a nightmare is: A day without reading, writing, conversation or coffee.