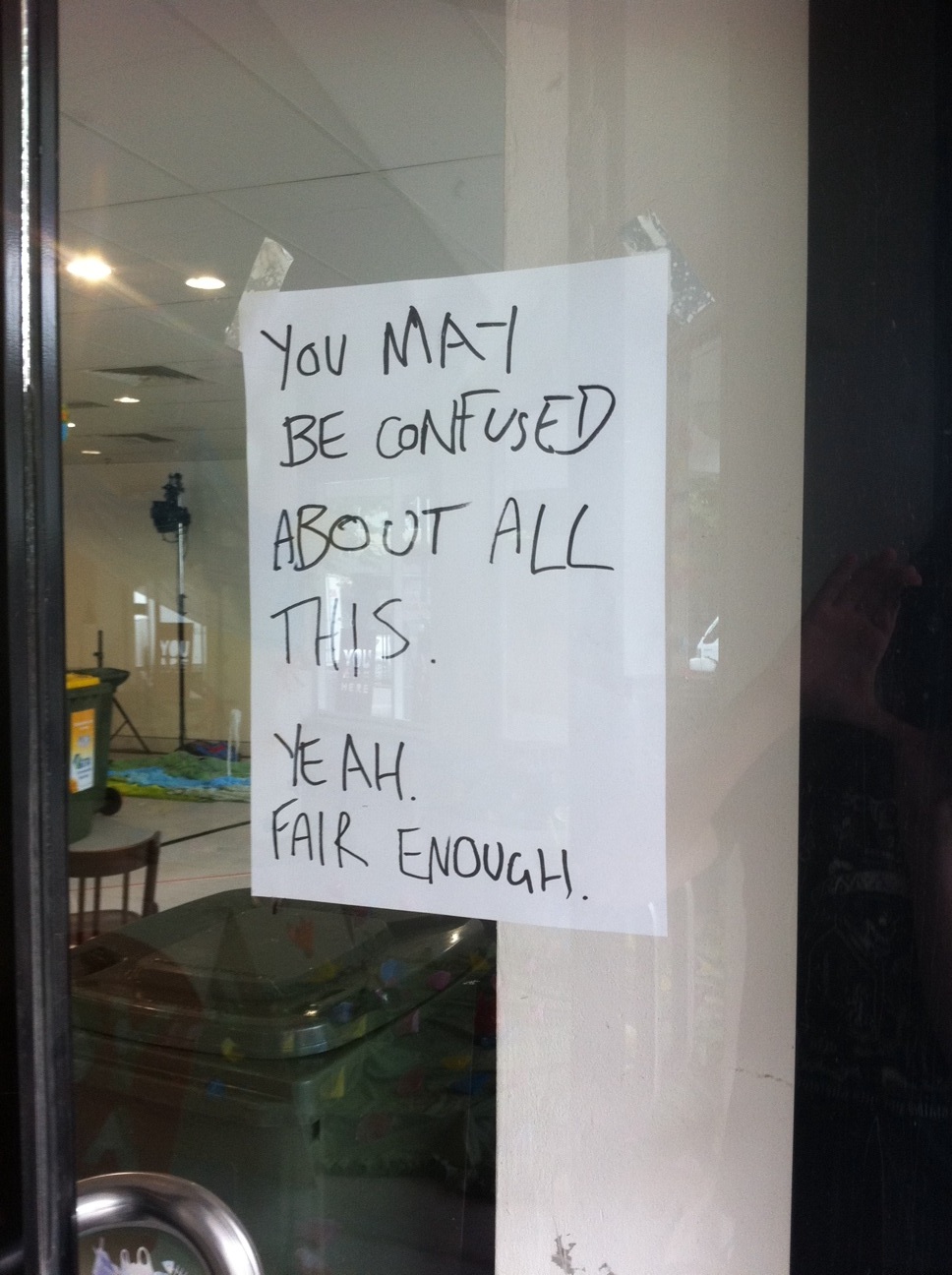 Just the other day I stumbled across this article while catching up on the not-latest edition of BMA magazine (sometimes I read back issues to find out all the stuff I’ve missed out on. What? Does no one else do this?). It’s a rundown from Glen Martin – Canberra muso, writer, manager of Pecha Kucha Canberra and doer of art world good – on what he thought of last March’s You Are Here festival, and his hopes for its future. A little gratuitous to re-post here, I admit, but I feel he really hits the nail on the head in regard to the way things went down.

Earlier in the month I had a meeting with Canberra arts dynamo (and former scribe of this very column) Yolande Norris, to discuss some ideas for You Are Here 2012. It’s early days and nothing is confirmed, but initial rounds of ‘scoping’ are throwing up a collection of properly exciting ideas.

You Are Here 2011 was thrilling. That I could wander into Civic at lunchtime and be able to see an instalment of Austin Buckett’s magnificent lunchtime concert series, or visit a pop-up gallery exhibition in an old shopfront, or watch George Rose take over a wall and claim a bit of urban space for art instead of promotional signage filled the cockles joyfully.

You Are Here came together fast. Norris, alongside the mercurial David Finnigan and the rocksteady Anthony Arblaster, built a ten day celebration of activity and ‘doing’ in a super short time. Which meant that the festival had some frayed edges. And for mine, this was for the better. It wasn’t slick. It wasn’t anything close to corporate. Not all events worked. And yet, the sense of exploration and chaos served the wider festival brilliantly. It gave You Are Here an organic energy.

To head into Civic (which predominantly houses places where we shop and spend) and see visual or performing arts at all hours of the day was a joy. It accidently defined what the city needs to be, in its heart. Indeed, for those outsiders who suggest Canberra lacks one, here was the answer.

We’re not born to shop. We’re better at congregating, mixing, feeding off each other and building communities. Sorry to get a little metatossical, but this is the stuff that builds meaning and brings lasting pleasure.

You Are Here, by luck or design or a combo of both, articulated what a city should do – it should house creative talent and give them space to show it, and it should give its citizens an option to meet in the heart of the place and observe, have a dance or a sing or a laugh. The success of the ice-skating in Civic over winter is part of the same deal. It inspires a sense of ownership in one’s city. Civic pride if you will.

As You Are Here raged and roared, the Enlighten festival also happened. Apparently. I wouldn’t know, as I, like most of Canberra if we have a look at the statistics, missed it. Perhaps that was because the line-up, especially of musical artists, was a) odd, and b) said nothing about our place. I’ve nothing against Chris Isaak or Frankie Valli or even the current Frankenstinian incarnation of INXS. If you’re into it, well and good. But what do these artists say about Canberra as we turn 100? How do they contribute to a sense of civic pride?

You Are Here was a local festival of the finest kind – an event that celebrated the vast range of creative talent in this place and took it to the street. For that week the city felt different. Here’s to 2012, and here’s hoping that some folk in high places take note.

Glen, and hopefully at least a handful of others, will be glad to know that those folk have taken note, and we have been given the go ahead to throw ourselves into planning You Are Here 2012. Yay! If this gets you keen and sets your brain buzzing with ideas then you should head over to the You Are Here site to read about what happens next.

What happens really next is that I jet off (read: catch a coach) to Newcastle and This Is Not Art. THEN is the next next, and maybe we should talk?