Covert Jewels by Sydney’s Cinnamon Lee and Machine In the Garden by South Australian artist Christine Cholewa are two exhibitions  currently showing at CraftACT Craft and Design Centre. I was commissioned to write the catalogue essay for the shows, and CraftACT are always a pleasure to work with! Check out the shows before they finish on May 7th, and for more info head to www.craftact.org.au

Despite a disparity in materials (metal and glass) Covert Jewels by Cinnamon Lee and Machine in the Garden by Christine Cholewa are each luscious and beckoning; heavy with promise and rich with reward. These are exercises in revelation. One is a reminder of the inherent fruitfulness of the earth, while the other is a look at what might lie hidden beneath the surface.

Covert Jewels finds Sydney based metalsmith Lee arriving at a point where her practices in both contemporary jewelry and lighting design converge. The modern day mysticism of 3D modeling and rapid prototyping machines is paired with the ever seductive wonder of artificial light – here worked by Lee in the form of pre-programmed multi-coloured LEDs. 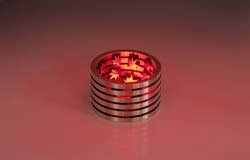 The result of this union is a suite of twenty silver finger rings, laid out in a row. What they might lack in stature these objects make up for with a powerful magnetism. Closer inspection is demanded, triggered by the diminutive scale and charged by the sifting shafts of light emitting from the rings’ centre.

The exterior surfaces of the objects are uniform and utilitarian, steely and impenetrable. Some are smooth brushed metal, while others have stacked, corrugated surfaces punctuated by tiny ‘windows’ hinting at the glow within. The LED illuminates the interior space to reveal the complexities of the ring’s hidden surface. Peering over and inwards we are reminded of a cave or sacred space, foreign light affording an otherworldly, jewel-like glow. Each interior features a repeated motif; a falling leaf here, a pattern or tessellation, even a tiny feather with its tip venturing over the rim. All the while the coloured light shifts and changes, cycling from warm reds to white light.

Covert Jewels centres upon the personal and private aspects of jewelry. Away from the showiness of much contemporary practice Lee’s collection of rings speak more for the relationship of a piece to its wearer, rather than that of the onlooker. Where the worn object might ordinarily pronounce its intention to the wider world, the rings of Covert Jewelswould, if worn in the traditional sense, actively deny it. In addition, where jewelry might usually assert itself as a thing of beauty, to either attract the gaze or flatter and highlight the structure of the body, Lee has created a collection of work that operates on an entirely different paradigm – as she acknowledges, one that is propelled by stealth and covertness.

South Australian based glass artist Christine Cholewa draws her inspiration from more familiar mystery, calling our attention to an array of treasures that have their origins in the earth. Machine in the Garden is bountiful with fruits, vegetables, farming machinery and rural scenes gracing both two and three-dimensional works. With etched hand blown glass, slumped and sandblasted tiles, each component is the end result of labour intensive processes that pay homage to ideas central to the exhibition.

Chiefly an exploration of the artist’s own struggle to maintain values and balance in life, Machine in the Garden also encompasses statements about the relationship of people to the planet as a whole, in an era where the population is becoming increasingly detached from food production. Here the phenomenon is typified by the rise of machines over nature.

Cholewa approaches these themes by placing sinister implications aside and instead focusing on the inherent appeal of the natural world and pastoral life. From The Garden, a spread of brooches in brightly coloured designs, contains a mix of picture perfect vegetables as succulent as they are playful. The use of bold graphics brings to mind the kitsch, wholesome appeal of classic childrens’ games such as ‘Memory’. Other works too are disarmingly reminiscent of games, puzzles and schoolbooks, relics from childhood and more simplistic times. The title work Machine in the Garden is an assemblage containing a combination of photographs, found images and drawings, the black and white illustrations of produce, tools and machinery plucked from vintage farming supply catalogues.

Photographs of a personal nature coincide with the found imagery. Members of Cholewa’s extended family appear in a number of images, and some are taken in rural Ukraine, the country of her heritage. A direct connection can be found in The Harvest, a multi-paneled work showing an idyllic image of a farming couple, its faded graphic quality conjuring a serene nostalgia. The couple is Cholewa’s grandparents, shown at work in 1940s Canada – the very same photograph that hung on the wall of her family home as a child.

The source image is printed as a stencil in a process similar to that for making a silkscreen, before being affixed to tiles and sandblasted. The glass ground lends a high gloss that encourages the play of light and seems to shudder with life. In this work, as others, the colour green is prevalent, if only just a hint like a new-growth blush. In Food For Thought a gathering of bowls and cups are arranged alongside found objects – farming and gardening implements, trowels, spades and forks, all weathered antiquities sourced from trash and treasure. Among the recurring tractor motif etched into the surface, green double helixes can be found wandering and unfurling across the glassware.

Those aspects of the food industry associated with transport are represented widely throughout the exhibition. This is most notable in The Long Road, where truck rearview mirrors tilting outward from the wall trap the burnt-in reflections of the road behind, gathering a sort of misty recollection from the long haul driver’s seat. The mirror’s etched surface switches us disconcertingly between real and imagined, fact and memory.

Through such vignettes, Machine in the Garden asks us to stop, marvel, be seduced by the earth’s sustenance and consider the origin and process behind the natural world’s capacity to give as much as it takes. It’s not quite a call to arms but a love letter to a long suffering partner – the ‘garden’ that grows doggedly despite our interference, mechanical intervention, despite us.