First impression of Newcastle: it’s like the Canberra of my dreams.

Two things that are refreshing about this city:

What immediately struck me about This Is Not Art was how many spaces had been made available for this huge range of events. Reading the festival program prior to my arrival it made little sense to me: how could this insane number of panels, presentations, exhibitions and performances, not to mention areas to lounge around and drink, possibly all occur simultaneously in one city centre?

stacks of wonderful, vacant buildings in various states of disrepair. Abandoned property that has, somehow, been handed to over to the arts and creative industry. Hard to believe, but more on this later.

I awaken on my first day ready to find my feet and get my bearings. As a directionally-challenged individual I expected this to be very difficult indeed, but upon venturing out of the safety of my hotel (I know you’re meant to camp, or just stay out all night, but yes, I am totally soft) I found that the layout of TiNA venues is logical and accessible – all within easy stumbling distance. Is it wrong that I didn’t expect this to be so well organized? The control freak in me is very pleased indeed.

One of the first venues I stumble across turns out to be hosting my first event of the weekend: the Nanoworks Non-Fiction Workshop. Covering self-editing, interviewing and reviewing for budding writers this workshop sees keen beans such as myself gathered around tables being gently lectured in the points of writing that I don’t remember being taught at university –for none of the cost! Set within a disused shopfront, Staple Manor is not only a venue for such discussions but also a sunny zine-making studio – fitted with printers, copiers and, well, staplers, among other bits and pieces. I envy all those who have the energy to make use of them. As an aside, the window houses the unexpected delight of a whopping chandelier made entirely out of HB pencils, by artist Miriam Chatt.

Early in day one I am forced to confront one of the most trying truths about TiNA – everything I want to see overlaps! Well, such is life – I’ll just have to build a bridge and get over it. The first victim of this fact is the Motel Sisters shop window performance When The Going Gets Tough. I spent about ten minutes watching it unfold, but had to run off, thus missing the remaining hour or so. From the program, I gather that the piece is a parody of a David Jones visual merchandising stunt starring Megan Gale. I return later to view the aftermath, but am no more the wiser.

After encountering epic hills of a San- Franciscan ilk I arrive at the Royal Exchange, to a panel discussion entitled Stop! That’s Textual Haraasment!. The talk examines the intereactions between writers and editors, for both fiction and non, and while a little out of my league (I’m not pitching a novel anytime soon) it is enlightening and entertaining. Did you know that an average of only six or so new Aussie authors get signed every year? Tough eh?

At this point I retreat to my hotel to attempt a nap, but alas, no time! Must. Keep. Going.

Power-walking back down Hunter street, I duck into the Front Room Gallery at the TAFE to check out Hypervisualseafoodextender Vs. RSI. I like what I see. There’s some really interesting stuff happening with textiles and ‘fibre arts’ at the moment, that blows all my preconceptions out the window. It’s kitsch and a bit cheeky, all technicolour and bedazzlers.

THE LOCK UP – JOHN PAYNTER GALLERY

I love colonial goals with original cells. I wish Canberra had one. Newcastle does and it’s The Lock Up. It also has a hot little gallery space, which the crew behind Dorkbot have secured for their showcase exhibition Dorks Alive. These guys are oh so clever and I am filled with Canberra pride as most of them hail from the ACT. Most astounding is a new work by Mitchell Whitelaw – he has constructed a bracelet out of the weather patterns from twelve months in Canberra. I do realise that this doesn’t make any sense.

Some of the historical cells have been utilized for other TiNA installations. Particularly effective in this environment is the sound work Planes by Gilles Aubry. Seated in the half-light of a dank cell with nerves jangling, the audience is completely at the mercy of the roaring engine sounds he has collected.

An ex-Chinese restaurant has been completely given over to furthering the cause of visual arts – score! The place is packed with artworks, but my personal highlight of the China Club is the installation Alarming: a collection of assorted alarm clocks, all set to go off in unison at an unspecified moment during the festival. It reminds me of Yoko Ono’s piece in the 2008 Sydney Biennale –a telephone that she would phone at random points of her choosing. The knowledge of this flooded the gallery with tension and anticipation. Amongst the installations, Min Mae hosted a Temporal Vivants session. The muses languished onstage, while the audience furiously sketched away and a cellist accompanied the scene. 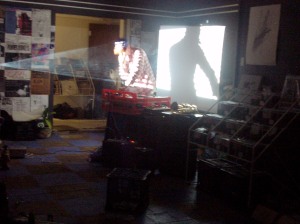 An independent record store on Hunter street, Vox Cyclops didn’t get organized in time to be in the offical TiNA program but have decided to have an exhibition and in-store performance tonight non-the-less. Thanks to the wonder of Face Book I am informed of this fact and make my way there just in time to catch Tim Dwyer busily noisemaking. There is a real buzz surrounding Dwyer’s work at the moment, and tonight it’s easy to see why. While he plainly has a taste for chaos, he pulls together a hypnotic set that fuses mangled words with spacious beats, projections and a little live saxaphone for good measure. Following was some less bridled chaos from Chrome Dome and Bum Creek, but by this time my patience is notably flagging.

The evening culminates at the Festival Club Masons – an old (or current?) Masonic temple. The event, Scary Canary, boasts a formidable lineup. I stick around just long enough to catch Suzanne Gray & The Katies, fronted by the fabulous Arlene Textaqueen. They begin their set with the short film MC G.F.C, warning against the looming Global Fashion Crisis and proceed to preach (in song) the benefits of op-shopping. On this notable high I head back to the hotel to dream of fluro and lycra.